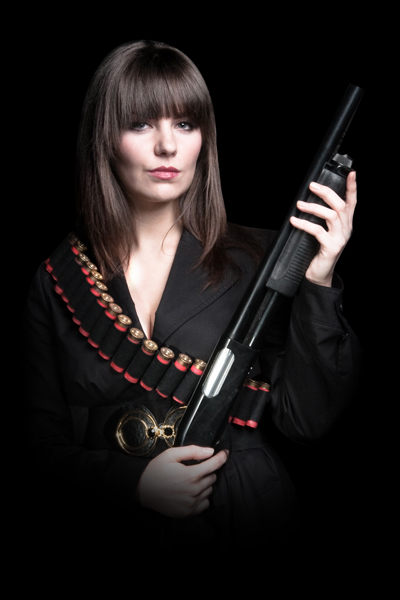 Yes, a blank firing gun (whether a real or movie gun) can result seriously injury or death if improperly handled.

Is there a safe distance for an actor to be in from of a blank firing gun?

It depends on the type of blank gun being fired. For example, there is really no safe distance for a shotgun. Some calibers of hand guns could see a range of 15 to 20 feet to be safe. It is always best not to put someone in front of a blank firing gun, however, stunt players can be sometimes be safe at a 10 foot range (again it depends on the firearm). Always angle the blank firing gun away from the person if more than one character is in the same frame. Always seek a clarification from the on set gun wrangler.

Is it possible to use a friend’s airsoft gun on set without a Firearms Business License or a licensed gun wrangler?

No, without the proper the protocol you could be arrested and charged with being in possession of a prohibited item.
Airsoft, especially ALL BLACK airsoft, is a REPLICA and considered a “Prohibited Device” under the Canadian Criminal Code and the Candian Firearms Act.
http://www.rcmp-grc.gc.ca/cfp-pcaf/fs-fd/replica-replique-eng.htm

If I have a small scene with a black firing handgun why should I need to hire a licensed Gun Wrangler?

Just as you wouldn’t go to camera without film insurance, for the same reason you shouldn’t try to shoot a scene without a professional looking after the safety of a blank firing handgun.

Have actors been injured with blank firing guns?

Yes, actors have died when the blank firing guns have not been handled properly. One was a self inflicted fatal injury when the actor put a blank firing hand gun to his head and pulled the trigger. The other fatal injury occurred when an object was lodged in the barrel of the handgun and then hit the actor as a projectile during the scene. Both occurred as a result of the firearms not being adequately supervised by a professional.

Do I need a police officer on set for just replica firearms?

You should check with the municipality you are shooting in. Some do and others only require being informed.

I have a stage play. Do I need a Firearms Business License to rent a replica?

Yes, you should contact your Provincial Firearms Officer about applying for one.

Do movie guns look as good as real firearms?

Yes, movie guns can have all the same actions are real firearms. They look the same; however, they can not be made to fire real ammunition.

Does your police gear look real?

Yes, much of the gear is the real thing. Often the hand guns in the holsters are often plastic or rubber. Inside the holsters they still look real.

I want to rent some SWAT kits. Do you offer advice on how to have the actors behave in the scene?

Yes, Mantis can supply tech advising with respect to SWAT and police tactics.

Can you supply period replicas?

Yes, providing we can have enough notice, Mantis can source what ever you require.

Do you sell the replica firearms?

Absolutely not! Replicas in Canada are prohibited and require a Firearm Business License to posses them. At Mantis, we only rent firearms to the Canadian film and theatre industries.

Do I have to hire a licensed gun wrangler if I only want to rent just a replica hand gun?

If you’re Props Master holds a valid Firearms Business License, then no. If not, then you are required to hire one.

We are just doing a photo shoot inside a studio. I don’t have a valid Firearms Business License do I need to hire a gun wrangler?

Yes, to transport and possess a replica gun requires you to have a valid Firearms Business License. If not, them you need to hire a licensed gun wrangler.

Can I just rent a prop gun for just one day?

All rentals are price reasonably for a one week period.